The Nanaimo Canoe & Kayak Club (NCKC) is refurbishing its Voyageur Canoes in preparation for the 2022-23 Season!

Call to arms!  Join others to learn the art of fiberglass boat repairs.  NCKC is looking for help to restore its historic 25 ft voyageur canoes that are used in a variety of community outreach events and programming, including school field trips, summer camps, regattas, and multiday paddling trips. Unfortunately, two of the canoes haven’t been used in several years and are not seaworthy in their current condition. 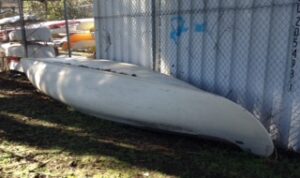 Over the fall months, dedicated NCKC volunteers have sanded and prepared the canoes for the fiberglass repairs to take place this spring.  Paul Steele of PMG Heritage Yachts is overseeing this project.  NCKC is grateful to have the support, knowledge, and experience that Paul brings to this legacy. Volunteers receive a site and equipment safety orientation and are provided with the skills, training, and knowledge to perform this valuable work. NCKC is looking for  volunteers to complete this project.

Two of the canoes have been restored and have been used by Summer Camps and several groups such as Residents of Berwick Retirement facility. Unfortunately, on November 24, those beautifully restored canoes were destroyed by a suspicious fire. A  rowing scull, owned by Nanaimo Rowing Club, stored next to the tent sustained irreparable damage. 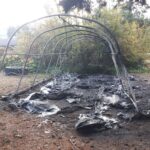 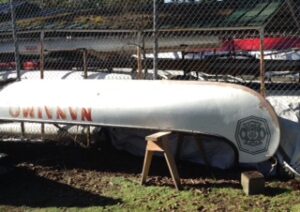 Work on the last Voyageur Canoe will start again in Spring 2023. If you have time and are interested in learning some new skills and/or sharing some of your own, please contact NCKC Equipment Manager, Sean Plecas at equipment@nckc.ca or (250) 327-1582.

HISTORY OF THE NCKC VOYAGEUR CANOES:

In 1988, the NCKC (at that time the Nanaimo Flatwater Racing Club) incorporated and began its history at Long Lake out of the transformed picnic shelter compound at Loudon Park with funds from the BC Games Legacy Project. 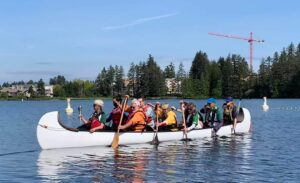 Shortly after that, two of the voyageurs were acquired from the Nanaimo’s White Ravens Canoe Club (WRCC) that was based at Departure Bay by the Kin Hut.  The WRCC was active in the community throughout the 70’s and 80’s with its members successfully competing in war canoe events hosted by the Snuneymuwx.  They gained respect locally at those events and later in their fundraising efforts over multiple years for the Children’s Variety Telethon. Club members would paddle these voyageur canoes across the Salish Sea from Nanaimo to Vancouver in February while accompanied by safety boats for around a decade.

Prior to the White Ravens Canoe Club, these canoes were used in part of a Cross Canada Tour and a race called the Double 20 as part of a Centennial Year Celebration to paddle the route of the settlers.

Join the project and continue the legacy of these historic canoes in our community. 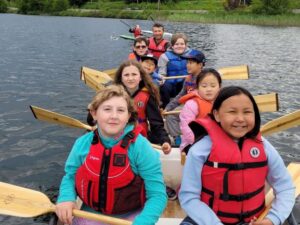 How to Roll a Kayak: January, February, March Pool Sessions.

NCKC is asking for your support